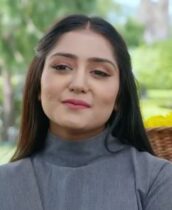 Tere Bina Jiya Jaye Naa brings a love story between Krisha and Devraj. Krisha is a middle-class girl, whose life changes overnight when she gets a prince’s marriage proposal. Krisha feels her dreams have turned true, that she will become a queen of a royal family. Her life is no less than a fairy tale, when her dream of marrying her prince charming turns true. She is really happy to enter Ambikapur palace as Devraj’s wife. She develops feelings of love for Devraj, but soon realizes that she is surrounded by lies, betrayals and evil plotting. Krisha’s life turns into a bad nightmare when she learns Devraj’s truth.

Krisha Chaturvedi:
Krisha is a sweet, simple, young, beautiful, hardworking and dedicated family person. She loves her family a lot. She does a job to support her family. She is enthusiastic. She believes that love will enter her life soon. She is a very romantic person at heart. She is a dreamer, full of positivity and excitement. She dreams for herself and others also. She believes that dreams often get fulfilled. She wants a prince to come for her and make her life really beautiful.

Devraj is a young and dashing prince with a intriguing personality. He has many shades hidden behind his calm and composed behavior. Devraj holds many secrets in his heart. He dislikes Krisha at first, but later proposes her for marriage. Devraj’s keen interest in Krisha and their marriage turns out to be his secret motive. He already has his lover in his life. He hides his reality from Krisha. Devraj smartly plays with Krisha’s emotions. He starts liking Krisha’s innocence, but doesn’t think he will fall in love with her.

Krisha works in a hotel to support her family financially. Her father was the star chef of the hotel, but left the job after meeting an accident. Krisha gets happy seeing a couple. She dreams of a romantic prince coming in her life. She tells her friend Rani that her prince will come in a unique style. Her love interest Raj makes an entry in the same way as she describes. He likes the hotel where Krisha works. He wants to buy that hotel. Krisha tells that even fairy tales turn true. She goes after Rani to help her in welcoming the prince. She goes to the ghat to welcome the prince arriving to the hotel.

Krisha gets the garlands there on time, but falls over her face, while dropping the garlands. The garland falls right in the neck of the prince. Singh gets angry on Krisha. He welcomes the prince. Krisha meets the prince Devraj. She apologizes for her mistake. She looks for Singh. She learns from Rani that Singh is with Devraj. She finds them having a meeting. She wonders if the prince is complaining about her. She doesn’t want things to go wrong. She finds some blood drops on the floor outside Mr and Mrs. Deewan’s room. She assumes that Mr. Deewan had killed his wife, since he was treating her badly.

She calls Singh and other staff to check the room. She asks Mr. Deewan about his wife’s dead body. She tells that he has killed his wife. She meets Mrs. Deewan. Her concern turns out to be another blunder. Singh gets angry on her for blaming the guest for the murder. Mr. Deewan tells that the red colour is the paint, he was making a painting. Devraj finds Krisha in the mess. Singh asks Krisa to apologize to Devraj, he is the new owner of their hotel. Krisha says sorry, but Devraj fires her from the job.

Devraj manages to hold her hand. He saves Krisha’s life. She finds him falling down the cliff, after saving her. Krisha tries to get some help for him. Devraj doesn’t want her to risk her life. He shows his concern for her. Krisha saves him. She agrees to marry Devraj. Later, Krisha tells her parents that the marriage can’t happen so soon. The family is excited for the marriage. Krisha doesn’t want her parents to get troubled financially. Her parents don’t think Devraj’s family can wait for a long time.

Devraj overhears them. He tells that he can wait for Krisha. He respects Krisha’s decision and also her parents. He tells Krisha that he is with her always. Krisha’s parents tell her the good news, that they will be getting the insurance money in few weeks, they can do their duty and get Krisha married. They have an emotional moment. Devraj feels proud that they have self-respect and didn’t take his help. Her parents also respect Devraj a lot. Krisha likes to see the bonding between Devraj and her family. Devraj invites them to Ambikapur to meet his family. He tells that his family will make the marriage arrangements if everything goes fine. Krisha falls for Devraj. Krisha and Devraj get married.

The show is not totally new. A simple and innocent girl getting trapped by a rich man and finding herself caught in the life of deceit, is not a fresh concept. The actors here make a difference. Avinesh is a natural as the subtle, secretive and charming prince. Anjali as Krisha is also well-cast. Anjali puts the balanced charm and innocence in her character. Krisha’s character is nicely written. There are many surprise elements in the story, that will open up in the coming episodes. Devraj’s family will be introduced and build up the suspense. Devraj’s life holds a lots of secrets. Krisha’s way to handle the upcoming troubles will be something to see. The sets, costumes and visuals are just okay. Only the fresh pairing of the leads and their chemistry are appealing. Concept is predictable, but viewers can expect some unseen twists in the story ahead.

The show is a decent family entertainer. It attempts to be one of those great romantic mystery thrillers, but doesn’t live up to peak expectations.

Feel free to post your reviews in comments below. All off-topic comments will be deleted.