The episode starts with Thakuma saying to herself, “If I would’ve treated Binoy ji 8 years ago, then he might have got cured.  Now, no medicine can affect him.  What should I do now???”   She peeps inside Binoy’s room through the window.  She thinks, “Now, there’s only one way left. Yes, I’ll have to do that only.  I don’t have any other option. Hey Dugga Ma, please give me strength.”

Thakuma brings Binoy out of his room.  Sampoorna sees this and asks, “Thakuma, where are you taking him?  His health isn’t well today.  Please don’t take him outside.” Thakuma replies very proudly, “I know what I have to do.  You don’t need to explain me.”   Saying this, Thakuma drags Binoy with her.

Sampoorna tries to stop Thakuma, but Thakuma pushes Sampoorna and takes Binoy with her.

Thakuma brings Binoy to some place.  It’s the same place where Chandrachud’s men had attacked Binoy 9 years ago.  Binoy is shouting and asking Thakuma to leave him, but Thakuma doesn’t listen.

Everyone comes to Sampoorna and asks her why she is shouting.

Sampoorna cries and says, “Thaa.. Thakuma took Shashwati’s baba outside.  I tried to stop her, but she didn’t listen.  She was looking very angry.  Don’t know what Thakuma will do with him.”

On the other side, Thakuma is tying up Binoy with ropes all over his body. 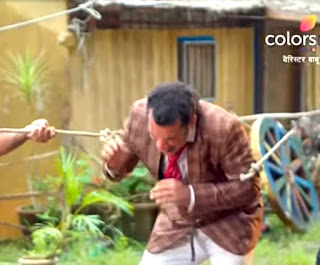 Anirudh, Trilochan, Somnath and Sampoorna come there.  But, the fox-like cunning Thakuma has already ignited fire all around Binoy so that no one can come near him.

Now, Binoy and Thakuma are surrounded with fire  from all the sides.  Other family members are screaming and asking Thakuma to stop all this.  Anirudh and Somnath are pouring water on the fire.

All of a sudden, Thakuma lifts a huge iron rod leaving everyone in shock.  Everyone is scared and stunned to see this strange avatar of Thakuma.  Trilochan shouts, “Kallindiiii… if you’ll do anything wrong with my brother, then you don’t know what I’ll do.  I’ll burn your entire family, your home, your everything in the fire of revenge😡.  Leave Binoy, or elsee…”

Thakuma laughs after hearing Trilochan’s words.  She says, “Or else??  Or else, what you’ll do Jamindaar babu???   You can’t do anything, huhhh….”   And Thakuma smirks. 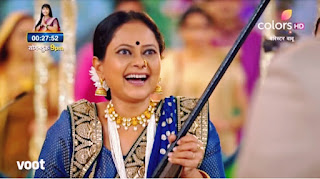 But before Trilochan could give her a befitting reply, Thakuma starts to go towards Binoy with the iron rod in her hand.  She says to herself, “Whatever these Roy Choudharys have done with my family, they will get its fruit today. I will pay them for their deeds.  Yes, these Roy Choudharys have really done sooo much for my family. They must get its fruit.  I can’t pay them for all their favours, but I can at least do this much for them.”

Aigiri Nandini… plays as Thakuma is heading towards Binoy with iron rod in her hand.  All the family members are trying to stop her by screaming and shouting, but Thakuma isn’t listening to anyone. 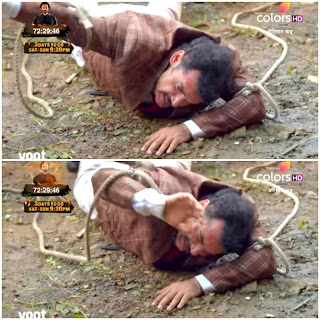 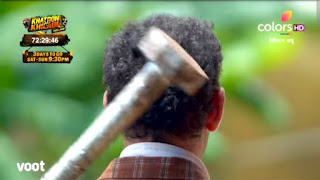 Binoy shouts in pain.  The heartbeats of Anirudh, Trilochan, Sampoorna and Somnath stops for a moment.  Everyone is standing still without even blinking their eyes. 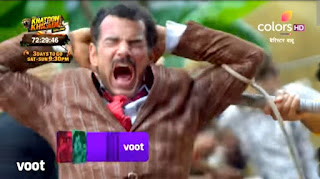 Binoy feels dizzy and he falls on the ground. 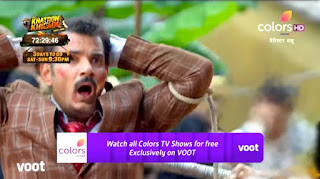 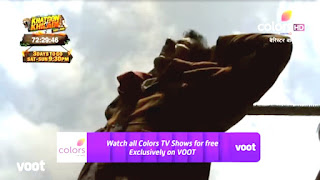 Thakuma throws away the iron rod.  She bows her head and goes from there.

Meanwhile, all the family members have successfully extinguished the fire by pouring water and all of them come near Binoy except Sampoorna.  Sampoorna is still standing in a shock. Anirudh sprinkles some water on Binoy’s face.  Binoy slowly opens his eyes.

On the other side in Roy Choudhary Haveli :-

Bondita, who is completely unaware of the fact that her Thakuma has hitted her Sasurji with an iron rod;  she’s smiling and playing with her babies.  All of a sudden, Shashwati comes to Bondita with the five orphan kids.  Shashwati says in a very innocent voice, “Bondita Masi, oohhhh… no, no, noooo..  Bondita Boudi, me and my friends want to play with the babies.  Can we play with our cute nephew and niece?”

Bondita makes a sad face and says, “Shashwati, you can play with the babies, but they can’t play with you.”  Shashwati gets confused and asks, “What does it mean Boudi?”

But Shashwati isn’t convinced at this.  She says, “But Masi, we are bored now.”  Suddenly, Shashwati gets an idea.

Bondita gets surprised at this.  She says, “Meeeeeeee?????   No noooo…  You all go and play,  I.. I don’t want…….”   But the kids interrupt her saying, “Come na Boudi, come na Boudi; please play with us Boudi, please come…” All the six kids start requesting Bondita to play with them in chorus.

Bondita opens both her palms in front of the kids and says, “Okay okay Bacchon! I’ll play with you all.”  The kids get happy and chorus, “Yayyyyyy!!!”

Tapur and Tupur also come there and say, “We also want to play. Please involve us too.”  Bondita says, “Sure, sure, why not? We all will play together.”

Bondita, Tapur, Tupur and the six kids start playing.  They are having a lot of fun.  All are laughing while playing.  Bondita’s BGM plays… (Tai tai ta, Mama badi ja…..)

Meanwhile, Binoy is slowly opening his eyes.  Suddenly, he starts recalling everything; how he used to be happy with his family, then the enmity between Tulsipur and Krishnanagar, and then how Chandrachud’s men had attacked him.  But, he doesn’t remember anything after that.  He has became mentally stable now. His memory has came back.

Binoy gets confused after seeing everyone sitting near him and he asks, “Anirudh, Da, Som, where am I?  Why you all are here??  And why you all are crying????”

For a moment; Anirudh, Trilochan and Somnath think that they’re dreaming. But when they pinch themselves, they can’t believe their eyes and ears!! The first thought that comes in their minds is, “The man who was mentally unstable from last 9 years, how can he get cured in 9 minutes??”

Binoy says, “Arreyyy, will anyone tell me what’s happening here???  I don’t know why, but I’m feeling like I was sleeping from many years.  I don’t remember anything after that incident when Chandrachud’s men had attacked me.  Can you please tell??”

But, when a person gets all the happiness of the entire universe, then the person isn’t able to utter even a single word.  And the same thing happened with Anirudh, Trilochan and Somnath.  Their eyes are filled with tears of happiness.  They get soo emotional that they couldn’t utter even a single word.  Anirudh is trying to speak, but he is not able to speak because of his immense happiness.  Trilochan hugs Binoy tightly saying, “Bi.. Binoyyy…. Binoyyyyyyyyy……. My brother.. You called me Da??  You know, I was yearning from past 9 years to hear this word from you..  Please say that word once again.”  Although, Binoy doesn’t know what his Da is telling, but still he gets emotional after seeing his Da in such a condition.  Binoy says, “Da, Da, what happened Da???  What are you speaking Da?  What had happened in 9 years??”

Before Trilochan could say anything, Anirudh and Somnath hug Binoy very tightly.  Binoy gets confused as well as very emotional.

Shashwati gets overwhelmed and very emotional after meeting her Baba. Later, Anidita tell Binoy that he has became a grandfather. Binoy’s eyes get filled with tears of joy.