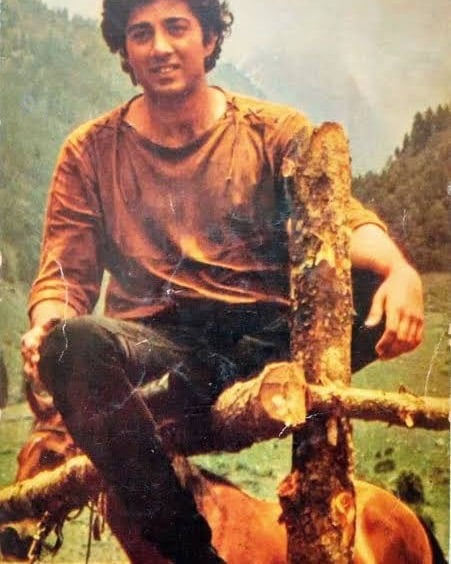 Bollywood’s angry action hero Sunny Deol celebrates his 65th birthday today. Son of veteran actor Dharmendra, Sunny made his debut in the 1983 movie Betaab. The actor went on to star in some of the most successful movies of the eighties and nineties like Ghayal (1990) for which he won the Filmfare Award for Best Actor and Damini The Lightning (1993), which won him the National Film Award for Best Supporting Actor. On his birthday, here’s a look at some of his movies that you must watch:

Betaab turned out to be one of the biggest films of the year, marking the successful launch of Dharmendra’s 27-year-old son. (Image: Instagram)

It’s not a debut good enough if it’s not a love story opposite another newcomer. Taking cue from the acting debuts of Rishi Kapoor-Dimple Kapadia (Bobby) and Kumar Gaurav-Vijayta Pandit (Love Story), Sunny Deol also started his journey in Bollywood opposite debutante Amrita Singh with a romantic film, a trend that several other celebrities, including Aamir Khan-Juhi Chawla (Qayamat Se Qayamt Tak), Kareena Kapoor-Abhishek Bachchan (Refugee) and Ranbir Kapoor-Sonam Kapoor (Saawariya) have followed and that religiously continues till date.

Betaab turned out to be one of the biggest films of the year, marking the successful launch of Dharmendra’s 27-year-old son.

Though he starred in several successful films early in his career, it was Rajkumar Santoshi’s directorial debut Ghayal that established Sunny as one of Bollywood’s leading men, earning him his first National Film Award. Despite clashing against Aamir Khan’s Dil, another blockbuster of that year, Ghayal was among the highest grossing films of 1990.

Another Rajkumar Santoshi film starring Meenakshi Sheshadri and Sunny Deol in lead roles. Sunny’s performance as Govind, the lawyer of a woman fighting justice for her domestic help, a rape survivor, is arguably his career best.

Several of his iconic dialogues, including ‘dhaai kilo ka haath’ and ‘tareek pe taarek’, are from this cult classic, earning him his second National Film Award.

Though this Yash Chopra film essentially belongs to Shah Rukh Khan, it is Sunny’s naval officer Sunil Malhotra that gives the Darr its steady charm. A stark foil to Shah Rukh’s eccentric lover, Sunny plays the ideal boyfriend and then husband to Juhi Chawla’s Kiran as she deals with a maniac stalker.

In this Raj Kanwar film, Sunny is the obsessive lover who cannot let go of his girlfriend even after she marries another man. Sunny’s earnest, layered performance in Jeet is heart-breaking. He will make you root for his Karan throughout this tear-jerker of a film.

Also, you must watch Jeet’s hit track Yara O Yara. Bollywood has had many dancers, but none compares to Mr. Deol. Watch the song and you’ll know why.

This JP Dutta war film has a large ensemble cast starring some of the finest actors of the time. Sunny, however, easily stands out as Kuldeep Singh, the Army chief deftly heading the battalion in crisis, eager to kill or be killed to save his country. If not the entire film, watch the monologue that he delivers while reprimanding Mathura Das, a fellow officer.

The film, as they say, has action, dance, romance, drama and lots and lots of Sunny Deol. (Image: Instagram)

This Anil Sharma film had a 45-year-old Sunny Deol romancing a 25-year-old Ameesha Patel and how. A love story set around India’s partition, Sunny plays the illiterate simpleton Tara Singh smitten with a Muslim student who is left behind in India amid communal killings and bloodshed as the rest of her family relocates in Pakistan. The film, as they say, has action, dance, romance, drama and lots and lots of Sunny Deol.